“I don’t think of all the misery, but of the beauty that still remains.”
― Anne Frank, The Diary of a Young Girl

“Where there is no hope, it is incumbent on us to invent it.”
― Albert Camus

“My hope still is to leave the world a bit better than when I got here.”
― Jim Henson

Work lately has been…well honestly it has been depressing. I wish that I could share all of the stories of my students. But believe me when I say, this year has been full of heartbreaking stories of the lives of children Ellie’s age.

Why is this child experiencing abuse? Why is this woman the victim of domestic violence? Why is he choosing to drink his life away? Why, why, why? Why is there so much sadness, so much brokenness, and so much pain?

Halfway through this year I experienced a staffing change and had a new teacher join me in my classroom. It has been a rough spring. As I said before, it has really been quite depressing. These kids come to school, having experienced so much of the sadness and brokenness that the world has to offer. And what can you do? They’re full of anger and most days it just seems like you’re never enough. Friday morning my co-teacher and I were talking about this. She told me a story about driving home the other day after picking her daughter up…she witnessed some sort of domestic dispute involving a man and woman and less than savory words. After telling me this story she threw a thought out there…

This world is so full of hate. There is so many bad things going on. And what are we supposed to do? It’s just so depressing…

And it’s true. This world is an awful place. It is filled with awful people, and awful things.

And what can you do? It doesn’t take long until you begin to feel dragged down by all of the hurt and all of the pain that you see happening all around you. And your mind kind of begins to just shrink into itself and try to forget the world…there is safety inside yourself. Or maybe instead of withdrawing, you just harden your heart and stop feeling. Your heart can’t handle all of the brokenness and sadness…and you slowly develop a sort of immunity towards the pain in this world.

I’ve been in both of these places before. Working as a Head Start teacher I’ve seen so much pain and so much brokenness. And among children so young at that. And sometimes when it starts to be too much I’ve found my mind retreating and my hard turning to stone.

How is a person supposed to handle it all?

How are we really supposed to be surrounded by all of the horribleness of this world we live in and be able to feel? How are we supposed to see the pain and yet live on? How are we supposed to feel the sadness and yet thrive? It just doesn’t make sense. So we allow ourselves to become depressed. And we mentally and emotionally withdraw from the world, and maybe even from the people around us. Because the truth is, the world is sad and broken.

But we’ve got it all wrong.

When my co-teacher threw that question out there my heart immediately responded. I realized that I had been withdrawing into that safe place, amidst all of the chaos and brokenness my class has been experiencing. So I told her the only thing that I have ever experienced to have made a difference in combating the harsh realities of this world.

The only thing I’ve ever found to help in situations that seem just too unbearable is prayer. Because sometimes everything we do is not enough; but prayer is. A while ago I had a child who had witnessed their father shoot their mother. Obviously, this had quite an affect on this little one. Every nap time this child would kick and scream and fight…and I would sit there rubbing their back, trying to soothe. But it never helped. No toy, no amount of rubbing, nothing ever helped. And one day out of desperation I began to pray…and like the flip of a switch the child calmed, and drifted off to sleep. I did this every nap time until the child went of to Kindergarten. It was then that I realized just how powerful praying in the name of Jesus is.

God calls us to have hope.

But in your hearts revere Christ as Lord. Always be prepared to give an answer to everyone who asks you to give the reason for the hope that you have. But do this with gentleness and respect.

We are supposed to face this world, along with all its sadness and brokenness with hope.

I know I’m wicked nerdy…but I can’t help but visualize one of my all time favorites here. And no wonder I have claimed that J.R.R. Tolkien’s literary masterpiece The Lord of The Rings changed my life.

The battle of Helm’s Deep. Please tell me you all have seen it! 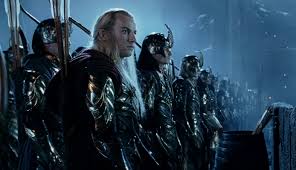 The Elves part of the wall, of course, will suffice for this illustration.

It was a battle doomed from the start. The “good” guys were far outnumbered. There was no way that they could win. Yet they faced their enemy, remembering the words of the Wise one…”at dawn, look to the east.” Even when the battle wore on, and it seemed as if defeat would occur momentarily. Still, the “good” guys held on to the hope contained in those words. Though they did not know exactly what this hope was made of, they held the hope nonetheless…despite the sorrow, tragedy, and despair of their world in the midst of that battle. And at dawn, their hope came. Turning the tides of the battle and chalking up one win for the “good” guys.

Sometimes I wish that life was more like LOTR. It often seems that physical battle might be easier than the mental, heartfelt battle that we experiences again hopelessness in our reality. But sadly, I will never be an elf.

Though I can hold on to hope as these literary creatures did.

Because God calls us to be hopeful. Despite the sadness and brokenness that surrounds us.

And what is this hope?

And we will live forever with the One that has loved us despite it all. The one who loved us enough he allowed his physical body to be broken, and his human heart to feel all of the sadness of everyone who ever lived. But the sadness and brokenness he bore through His death resulted in life.

And it ended with Hope for all of us.

So Ellie and Kreade, I hope that you learn to face this world despite all of this brokenness and sadness with hope in your heart. Yes, this world is a tragic place. But the hope in our heart causes us to fix our eyes on Him. And on living forevermore in the presence of His glory.